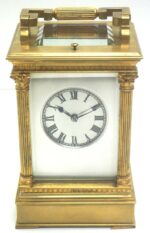 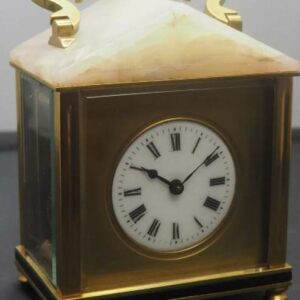 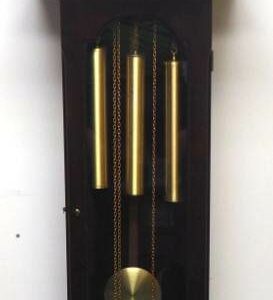 This French 8- Day Repeat Carriage clock is truly a timeless and magnificently designed clock, with the special touch of hand crafted decoration. It delicately mirrors the elegant design of French architecture and contains clear, glass panels which enable the eye to see the inner mechanism in motion. Featuring Ormolu metal frame and Roman numerals.

An extraordinary French 8-Day Repeat Carriage Clock. This would truly be a magnificent and refreshing piece to add to anyone’s collection.  This unique piece was made from Ormolu, known for being wealthy and truly beautiful in the finish, this is very popular as a collector’s piece. The key features of this clock include an 8-day power reserve, a traditional bell strike on hours, dainty hands and a seconds hand that enables detailed and meticulous timekeeping. Very rare to find in stores today, this was believed to be manufactured during the 1880s, a truly timeless piece for your collection.

This clock includes roman numerals that depict the time and glass panelling. When turning this piece to face the side, you will be able to get a closer look at the inner mechanism. Golden pillars are placed in each corner of this carriage clock, to mirror the beautiful style of French architecture, you will find that on the North side of the pillars, there is a unique rose gold casing. This is perfect to fit in any home due to its versatile yet traditional design.

Thought to be in impeccable condition, this was recorded as being crafted during the late 1800s (Circa 1800) The design and structure of the clock has never began to rust or drift away from its original, authentic design which was proven to be a French design. The combination of its original lever escapement and fine enamel dial makes this a piece that can withstand the test of time.

The main feature of a carriage clock is the handle, which allows it to be carried easily so it makes sense that it’s called a carriage clock. However, this type of clock has had other names in the past such as the Officer’s clock, this name appeared when armies on the move would often use these on the move.

How Old Are Carriage Clocks?

How Do You Wind A French Carriage Clock?

The recommended way to wind up a French Carriage Clock is using the key that comes with it. With a gentle force, you push the key against the square arbour and turn the key as many times as you can until you feel a slight resistance. After completing this method, this should ensure that the clock will last for the full 8 days. You should start to hear a ticking sound after winding it.

There are no reviews yet.