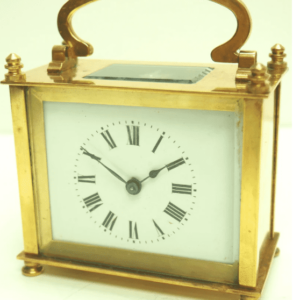 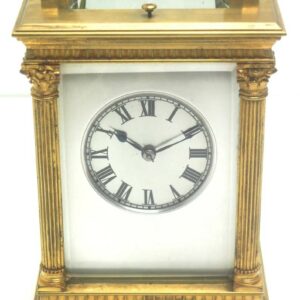 A classic & traditional French Carriage Clock. With accompanying bevelled glass side panels, a classic handle for transportation, and Arabic numerals for the forward facing clock. This is a perfect example of a traditional carriage clock.

Following in the footsteps of so many other Carriage Clocks, this traditional piece offers the simplicity and delicateness of a standard carriage clock. With it’s Ormolu casing which features a bevelled glass ceiling and side panels, allowing the owner to peer through and watch as the inner mechanics work towards providing a perfect unison of a working order. The face is painted with a high standard enamel, including Arabic numerals and the original hands.

The piece stands on it’s 4 turned bud feet and is believed to have been produced towards the end of the late 1890s.

The History of The Traditional Carriage Clock

A common unknown fact is that the prime feature of the carriage clock, which sets it apart from the rest isn’t it’s ormolu design or striking features, it is the handle upon which it is carried. Abraham Louis Breguet invented what we know as the carriage clock in the early 19th Century, it was designed as a travelling clock and was gifted to Napoleon. They were made for armies on the move to be able to tell the time and keep to schedules.

As time moved forward, carriage clocks were not  just useful war equipment but they also became useful in day-to-day life, for train conductors and sailors.

This particular clock was made slightly later than that of the original carriage clock, est. 1890, the clock is believed to have been part of a large production of carriage clocks, however what makes this individual piece shine is the condition and the traditional finish.

How To Clean A Brass Carriage Clock Case

To clean anything that is made out of brass, lemon and baking soda has always been a favourable mixture to make brass appear more shiny. All you have to do is mix the juice of half a lemon with one teaspoon of baking soda and stir until the texture becomes a paste. You can then add the paste to the brass with a smooth cloth and if you find that the tarnish is harsh then its best to let the paste sink in for 30 minutes before removing the paste with a cloth dipped in hot water and drying.

How To Adjust The Speed On A Carriage Clock?