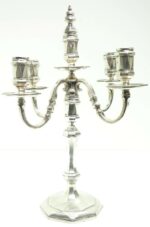 This Candelabra offers a completely contemporary, modern yet vintage appeal to any dining table or guest area, light up your home with these vintage candelabra pieces, made for the wealthy during the ‘golden age of Hollywood’ the 1930’s.

The Solid Silver Candelabra is a stunning table centrepiece with an English antique design. This item combines the elegance of silver with a candelabra that includes five candle cups and five pillar holders to create a striking centrepiece for your dining table. With its sturdy, yet delicate frame, this candelabra can be used for both decorative and functional purposes, either way it is a classic piece of traditional and vintage furniture.

Candelabras can quickly become the centre of attention at any dinner table, whether you’re choosing to keep them for their main functionality of holding an array of candles to light up your dining area, and enjoy the company of your guests, and warm food under candle light, or whether you’re choosing to use them for decorative use, wrapping them in holiday festivity decorations such as mistletoe and holly during Christmas, black paint and fake blood during Halloween and sparkles and party streamers during New Years.

Candelabras ooze elegance and royalty, perhaps because they are most associated with British elites, it is believed that Candelabras have been around for many years possibly as early as 3000BC, although since then the designs and purpose having change drastically, in olden times candelabras were often used in bedside manner, for the use of reading as often one candle would not provide enough light to read during the night, however now candelabras can typically be found in homes of royals or even museums as they showcase the the wealth and luxury of those fortunate enough to dine surrounded by the ‘tree of candles‘ as referred to in it’s Latin terms.

This particular Candelabra is from the 1930’s and is therefore considered a vintage piece, known as the golden age of Hollywood, this particular candelabra may have been heavily influenced by the wealth and luxury of Hollywood, belonging to a wealthy family who did not suffer from the late 20’s market crash and had the exemption from poverty.