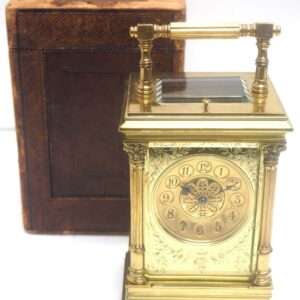 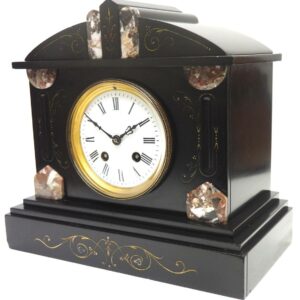 This striking carriage clock is perfect for your desk or mantle. The finely carved antique oak case frames a highly polished brass and silver-plated dial in classical style while the steel hands and curved pediment make it a classic timepiece that will always be in style.

The 1920’s oak carriage clock is a fine carved antique carriage clock, in perfect working condition with a protected glass case. The beautiful steel hands and curved carved pediment top are features of the classic design. This handsome timepiece is sure to please any collector or admirer of German antiques and German clockwork.

Carriage clocks were designed in the early 18th century, to be the first travelling timepiece. The majority of carriage clocks were produced in England and France, however some countries, had began to hear word of the designs of traveling carriage clocks, which allowed men who worked on railways to have carry the time with them.

This particular carriage clock is of German decent.  Since the renaissance period, Germany have been known to be a large player in the clock-making game, with Southern regions of Bavaria, Baden-wurttemberg being an important centre piece for Germany’s horologist skills.

The classic, Cuckoo Clock originates in Germany, from the Black Forest. Whilst Germany also has large ties with other types of antique and vintage clocks such’s as Vienna wall clocks, in which Austrians gained a great reputation for their classical designs and reliability of each piece, as they were used in railway stations, post office and police departments, these were considered incredibly reliable and accurate time pieces.

When looking at German designs, there are no single key factors, in many French designs we see the inclusion or marble or gold, however, Germany showcase a large range of designs when it comes to clockwork, although, the most popular style includes naturistic themes of wooden cuckoo clocks as a reminiscent to their origin, the Black Forest.

How Often Do You Wind A Mantel Clock?

Much like a carriage clock a mantel clock needs to be wound every 7 – 8 days, typically once a week at the same time is the optimal time to wind a mantel carriage clock.

This beautiful German carriage & mantel clock is kept in great condition, so it’s only natural that you’ll want to preserve it’s life and keep the clock in great conditions for many years and generations in order for it to achieve a higher value. Keeping an oak & mahogany clock in mint condition can often be tricky. Firstly, you want to ensure that it is stored in a cool dry place, avoiding damp areas and importantly, avoiding mantelpieces above a regularly used fireplace, this can cause the oak to stain, discolour or even begin to break.